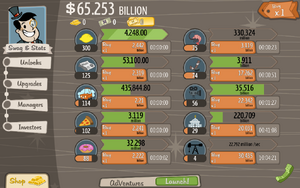 Earth is the starting location of AdVenture Capitalist. The game starts with a tutorial, and after its completion, the player can invest in businesses.

There are a total of 10 businesses on Earth:

Managers are upgrades that enhance business productivity. Earth is the only planet to have all three categories of managers: normal, accountant, and discount. 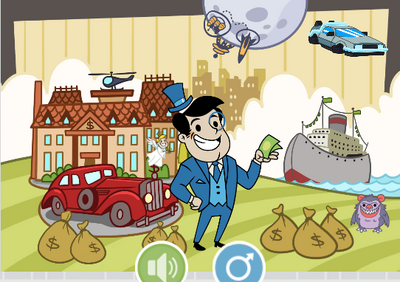 Unlocks are very similar between investments. Traditionally each unlock is equally spaced from the next, with some variation. At the start of Earth, for all investments except Newspapers, unlocks will double the speed of the investment for the first 6 unlocks. The 7th unlock and onward will instead multiply the investment in terms of profits instead of its speed. The amount which it is multiplied by usually depends on if an unlock happens to land on a significant number of that investment, such as 1000, 5000, etc.

Sometimes, unlocks can have a massive profit boost, for example, when you reach 1,000 Newspaper Deliveries, its profit multiplies by a ridiculous 7,777,777.

The player can also play other planets, but they need to buy them first. Currently, the other planets are the Moon and Mars. The Moon costs $100 trillion dollars to be unlocked and Mars, 100 Mega Bucks. They offer a slightly different Capitalism experience because going to another planet does not harm the Earth game, as the player can freely switch back and forth between the bodies easily.

Derrick Plainview is not on the “Capitalist Connections” paragraph.