Mars is the third planet released in AdVenture Capitalist. Like the Moon, it is complete with all of its own businesses, separate money and angel system, and its own original background music. Money on Mars is counted in "Mars Credits". After unlocking Mars, the player may travel freely between Earth and Mars (and the Moon if it's unlocked) via Mission control. Mars is so easy that you assumingly beat it in under a week on your first play through.

Mars currently acts as its own game. There is currently no way to move money between any of the planets and Mars. The money on Earth cannot be spent on Mars, or vice versa, same goes for angels. The only link with Earth is through Mega Bucks, since the Mega Bucks earned on Earth can be spent on Mega Tickets or on the Teal Suit, both of them being able to boost the investments on the other planets.

The true first place is taken by Profit Martians, they are a more active way of earning credits. Deploying them doubles profits. Clicking on them while deployed adds 1 second to the timer. Once the cooldown has begun, clicking reduces it by one second. Using an auto-clicker can keep the double credit buff going indefinitely. The cooldown starts off at 2:00:00.

Managers are upgrades that enhance business productivity. Mars only has the normal managers. There are no accountant or discount managers. 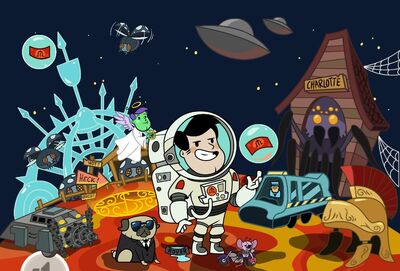 There are 637 unlocks on Mars.

Upgrades increase the profits by adding income multipliers to the businesses. There are three categories of upgrades on Mars:

Mars previously had the same cost to unlock as the Moon ($1 decillion, later changed to "just" $100 trillion) but was changed to 200 Mega Bucks, and then 100. It is the only planet that is bought with anything other than Money

Mars is the easiest planet to beat, assuming you take under a week to finish it on your first play through.