The Moon is a planet in AdVenture Capitalist. It was the first alternate planet added to the game, the second being Mars. It costs $100 trillion earth dollars to start the mission to the Moon.

Once the Moon is unlocked, the player may travel freely between it and the other planets as well as the events through the Mission control tab located in the AdVentures menu. It acts as a second "Earth", with different investments, upgrades, managers, unlocks. These main mechanics found on Earth still work the same way while on the Moon.

There are a total of 10 businesses on Moon.

Moon has two categories of managers: normal and accountant.

The Moon is renowned for being very slow paced, with many walls present throughout. It is usually played in small increments, then checked on later to see how much progress was made.

The Moon is dominated by Oxygen Bars quite early on, as the multipliers provided by its unlocks are quite stupendous. After hitting 720 Oxygen Bars, the profit made from this investment will not be surpassed by any others until the player reaches many Sextrigintillions of dollars.

Most of the time in the Moon is spent between 1440 and 2880 Oxygen Bars, composing at least 50% of the time spent playing. During most of this time period, Oxygen Bars will compose more than 99.9% of all profits, up until the point where the player is able to reach 600 Giant Lasers.

The Endgame is usually said to start at around the Quattuortrigintillions, where a massive wall to reach a 1 Quintrigintillion x9 All Profits upgrade is presented. This is followed by a 32 Quintrigintillion upgrade to purchase x3 Oxygen Bar Profit, then 600 Giant Lasers, and finally, the 1 Sextrigintillion x3 Laser Profit Upgrade.

This point is known as the endgame even though there's a 5720 Oxygen Bar unlock because the x666,666 profit multiplier for Oxygen Bars is so powerful that it propels the player through the rest of the moon in less than 2 days. Once 2880 Oxygen Bars is reached, the Moon is practically over, as the time it takes to finish the rest of it is so minuscule compared to the amount of time spent in every other area of the Moon, being a measly two days in comparison to what had most likely been months of playtime.

There are multiple changes which can be observed while playing on the Moon.

Secondly, each investment's unlock rewards come with unique income multipliers. The most expensive investment, Giant Lasers, gain an incredible ×75 multiplier for each milestone, while Oxygen Bars gain a ×12 multiplier for the first three unlock tiers, but the proceeding unlocks grant multipliers of ×22, ×333, ×4,444 and so on, up to ×7,777,777 (which is ridiculous). Many businesses also have unbelievably high multipliers for later unlocks, such as Werewolves, which, at 3500, gain an astounding ×9,876,543,210 profit multiplier.

Thirdly, no business earns a profit speed bonus by its own unlock tiers. The only way to speed up a business is by earning the "Everything Unlocks", which come at 1, 5, 25, 50, 75, and 100, and so on, increasing at varied intervals. 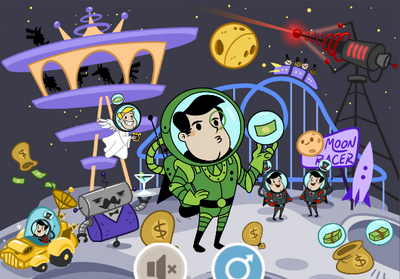 Money on the Moon is counted in "Moon Dollars", which are represented by an inward curved D with a horizontal line running through it (

). Moon Dollars, like with all other planets, cannot be used on different planets, and are a currency unique to The Moon. Nothing on the Moon, except for the exchange of Mega Bucks, can affect any other planet.

There are three categories of upgrades on Moon:

There are a total of 213 unlocks on Moon.